Alone in the woods: Casey’s return from homelessness and addiction

Casey began experimenting with recreational drugs when he was just 14-years-old, but by his early 20s methamphetamines had outpaced Lortab, Adderall and cocaine as his drug of choice.

“I started using opiates when I was 17 or 18,” he said. “I’d had surgery and was using them for pain. Later, I also used them with meth. It added like a calm to the upper effect.” 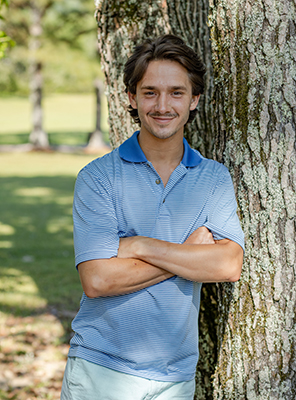 Casey leans against a tree at Royal Pines

Casey entered a rehabilitation center for the first time at age 19 to appease his family and admitted that getting clean wasn’t really the goal.

He was in and out of four Birmingham and Huntsville-area treatment programs in as many years and confessed that some of his experiences actually made his addictions worse.

“I was where I had all these great childhood memories, but now I was homeless in the woods.”

Casey did eventually find sobriety, but when his relationship with his fiancé came to a grinding halt, he again found comfort through chemical coping.

“I didn’t know how to deal with being upset,” he recalled. “I had a toxic mentality. As embarrassing as it is to admit , part of using again was to mess myself up so that she would feel guilty.”

After his habit cost him his job and apartment, Casey found himself alone in the wilderness in the dead of winter.

“I didn’t even have a tent,” he exclaimed. “I had a makeshift lean-to shelter that I covered with leaves. I lived there for three or four months.”

In that span, Casey unraveled an elaborate plan of deception to keep everyone from discovering his true plight. He stole razors and cleaned up in public bathrooms so his familiar face wouldn’t appear disheveled.

Unable to pay for his cellular service, Casey capitalized on free WiFi to message others and carefully constructed lies to avoid visits from family and friends. For months he was cold, wet, sick and alone, and no one was the wiser.

He stole food and money, which he used to buy alcohol, when the opportunities presented themselves. As desperation mounted, however, he began planning an armed robbery. Casey said a “miraculous” intervention by his mother ultimately thwarted the dangerous plot.

“It was a God thing,” he said with sharp conviction. “I was on WiFi and my mom called me through Facebook, she knew I was in trouble.”

Casey asked her to send him money through a phone application, which he confessed he planned to spend on alcohol. Instead, she bought him a bus ticket to the Jimmie Hale Mission in Birmingham.

“I came in grateful because I would have been in jail or dead.”

After three days at the facility, Casey decided to enroll in the free extended program, but when he discovered there was a waiting list, he became desperate.

“I was in tears,” he said. “I was at my wit’s end and didn’t know where I was going to go. I figured I’d be homeless in Birmingham at that point.”

Just hours before Casey was set to leave the Mission the leadership staff contacted Royal Pines to see if there were any vacancies. In the middle of that very phone call a client had received exciting news about a job and was leaving the same day. By the next morning, Casey was given a bed and established in the program.

“I learned more in the first four months than I did in years at the other places,” he said. “The Active Recovery program helps you see the things you couldn’t and make a game plan for improvement.”

Casey is studying developmental psychology at Wallace State and hopes to work with children who have undergone traumatic experiences or are struggling with substance abuse.

“I was very selfish in my addiction,” he said. “But I really do care about other people. I want to use my experiences to help others who are starting to make norskpornoxxx the same mistakes that I have. If there’s something I can do to help prevent that, I know it’ll make a difference.”