Although Matt had used drugs at least occasionally for much of his adult life, the recreational high took a much darker turn after his father passed away in 2001.

“We were very close,” he said. “We had a lawn-care business together and when he died it really messed me up. That’s when I was introduced to meth. I used it to help [cope] with his death and my marital problems.” 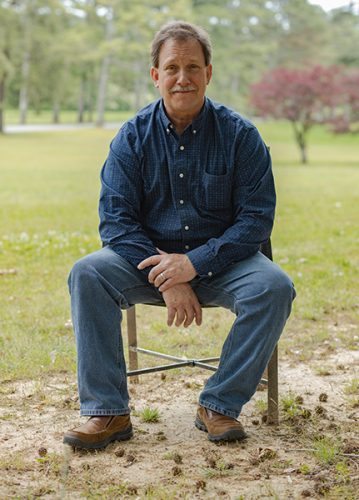 Matt sits in a chair outside at Royal Pines

Over the years the volume and frequency of his drug use continued to escalate.  Matt eventually began helping manufacture and sell methamphetamines while his life continued to unravel.

In 2008 he entered substance abuse treatment for the first time, but confessed he did so only to appease his family.

Upon exiting the program Matt returned to an environment conducive to chemical dependency and within two years his wife had divorced him and he was living in the cab of his truck.

“[My wife] dealt with it for years,” he recalled. “Meth ruled me though. It changed my mood and I’d stay gone for days at a time. After the divorce, I called Royal Pines.”

“I lost three good friends to the needle who never even made it to 40 years old.”

Matt completed two phases of the program over seven months and was even offered a staff position at the center after graduating. He declined that opportunity, a decision he says still haunts him today.

“I made a connection here,” he said. “I was making progress and trying to develop a relationship with God, but I just couldn’t get all the way there.”

He managed to stay clean for a year, but after taking a job as a third-shift security guard, Matt rekindled his relationship with meth to help him stay awake through the night.

Once he felt the drugs reclaiming control, however, Matt became overwhelmed with guilt and fear. Nightmarish thoughts of the horrific outcomes possible while being high and armed were too much for him to bear. Matt confessed the drug use to his supervisor and resigned from the position. 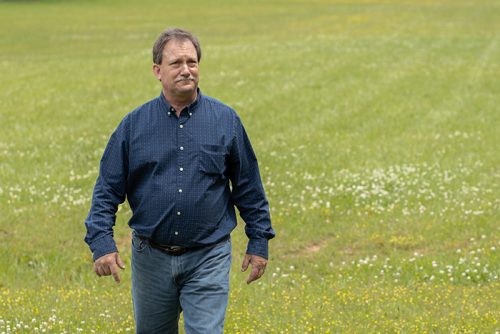 Matt walks through a field at Royal Pines

“I had all the dope I wanted and all the beer I could drink,” he said. “But I was miserable; I was still empty inside. I was going to take my life one night. I had the hose in the truck and was going to do the tailpipe thing. Thank God I passed out before trying it.”

“The Holy Spirit awakened me, He made himself real to me and I gave it my all.”

When he awoke the next morning, Matt was convicted by the seriousness of his condition and perhaps for the first time ever, was willing to do whatever it took to rid his life of the chemical torment. Matt again reached out to Royal Pines.

“I was broken inside,” he recalled. “The reason I couldn’t stay clean was because I didn’t have a real relationship with God and because I returned to my old stomping grounds. This time I opened myself up to Him completely, I gave Him the whole thing, not just a little.”

Matt prospered in the program, played guitar during graduations and worship gatherings and even resumed communicating with his ex-wife.

Four months after walking through the doors for the final time he felt restored. Matt completed the program and moved into a halfway house to avoid returning to toxic roots.

Within a year he and his wife were remarried. The couple even sold their old property and purchased a new home for their new beginning.

Matt also propelled himself from contracted janitor to assembly line worker and is now committed to being a “good husband and employee.”

When asked what advice he would give to someone facing addiction, he was quick to answer. “You have to get the spiritual right and the rest will follow. Give it time, but give it your all.  It’s not going to happen overnight, but God is good.”