By the time he was old enough to drive, Mark was mingling with the popular kids on campus and experimenting with alcohol, marijuana, and Ultram, a narcotic-like pain reliever. While many young adults turn to drug use as a result of peer pressure or a catastrophic life event, Mark was simply curious and liked the effects they produced, particularly Ultram. “At first I didn’t even know I was getting high,” he said. “I thought you were supposed to pass out or be wide open. I liked being mellow and laid back. I just didn’t realize the grip it had on me.” 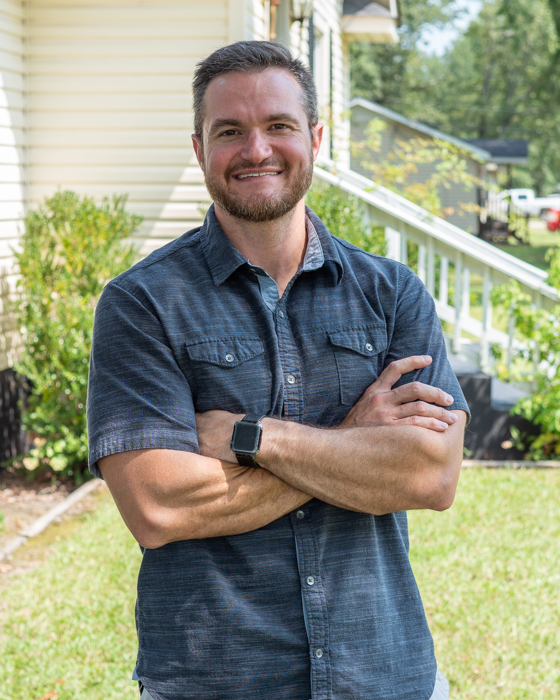 Mark outside his home in Glencoe, Alabama.

By the time he was old enough to drive, Mark was mingling with the popular kids on campus and experimenting with alcohol, marijuana, and Ultram, a narcotic-like pain reliever. While many young adults turn to drug use as a result of peer pressure or a catastrophic life event, Mark was simply curious and liked the effects they produced, particularly Ultram.

“At first I didn’t even know I was getting high,” he said. “I thought you were supposed to pass out or be wide open. I liked being mellow and laid back. I just didn’t realize the grip it had on me.”

After high school, Mark attended Gadsden State and graduated his preferences to Lortab, Percocet, and Oxytocin. When their effects became insufficient, he began pursuing alternative solutions and was eventually introduced to a new high that quickly resulted in routine visits to the local Methadone clinic.

Ironically, during all of this, Mark was working for a local pharmacist. Erratic moods and behavior raised suspicions that he might be abusing substances while at work. The staff organized a mini investigation and eventually found more than 100 Methadone pills in his possession.

“I was really blessed,” he said. “The people at the drug store were wonderful, God-fearing people. They could have made things a whole lot worse for me, but they knew I wasn’t trying to be a bad person. I’d just got mixed up with the wrong crowd. They let me take matters into my own hands instead of having me wait there and be arrested. I decided to go to rehab.”

Nineteen days later, Mark graduated the program then went to the jail and turned himself in. At his court date, much to his surprise, both the state and judge dismissed all charges and he was released with nothing more than a revoked driver’s license.

Mark was clean for six months but slipped back into the habit just before enrolling at the University of Alabama. He began injecting Methadone when the liquid form became available and was even experimenting with speed and cocaine on a regular basis.

After three years in Tuscaloosa, his academic shortcomings made him ineligible for further government aid, so he withdrew from school and returned home.

Mark said the next four years were “a blur” and that he was at an “all-time low.” He continued to embrace the euphoria Methadone offered but was adding Benzodiazepine, Klonopin, Valium, and Xanax to his daily regimen. The substances became the focal point of life and every task was reoriented to feed the fire. Paying rent and utilities, buying groceries, and his personal hygiene suffered as a result of his addiction. He even lured others into following him on the dark path.

“I started dating this girl and I took her all the way to the bottom,” he said with an air of disgust in his tone. “Man, I took her way down. She ended up leaving me, thank God! Wow, I wish I could make amends for that. I don’t know if she ever got off of it. I hope she did.”

Though he had grown accustomed to lying to family, friends, and co-workers, he carried the charade into new territory when he became a leader in Celebrate Recovery, a Christ-centered addiction treatment program, while still in the prime of his drug use.

“I was a wolf in sheep’s clothing,” he said. “My sponsor at Celebrate Recovery, Chris Jacobs, not only gave me food a lot of times but hired me to help him with his landscaping company. He was a great influence and was the reason I eventually went to Royal Pines. He had been through the program.

“I was just overwhelmed with the guilt and shame of living two different lives. It got so bad that one day I actually called the jail and asked the police if they could arrest me and detain me because I was on drugs and I needed to be locked up so I could get through withdrawals. They told me that short of robbing someone or doing something illegal they couldn’t arrest me. That’s when I started looking at rehab, but they all cost tons of money. I remember thinking, ‘What kind of world do we live in where someone who wants to get help can’t because they can’t afford it?’ I ended up going to a transition house.”

Mark’s stay at the home was short-lived and returning to the trailer was out of the question since he was months behind on payments. So, he did the only thing he could think of, and confessed everything to his mentor at Celebrate Recovery.

Even though the news of deception broke Chris’ heart, he took Mark into his home and kept an eye on him constantly. Mark called Royal Pines, where treatment is free, and was placed on a six-week waiting list, but despite his desire to change he held tightly to a secret stash of pills hidden in his wallet.

“Chris was telling me about how he got set free and about how he had to put in the effort,” Mark said. “He told me, ‘Nothing changes if nothing changes.’ And while he’s telling me this I’m thinking about the five pills I have on me. That was my breaking point. I could either give him what I had left or keep living like I was living.”

Mark handed over the remaining Methadone and stood by as Chris turned the pills into plumes of dust with his work hammer. He watched the tiny clouds fade into nothing and hoped his addiction would eventually meet the same fate.

Over the ensuing days, Mark suffered as withdrawals constricted his every move with python-like power. Chris was relentless, however, and pushed Mark through nine-hour days of heavy manual labor despite the cold sweats, muscle cramps, nausea, vomiting and diarrhea. It was brutal, but Mark knew it was keeping him from thinking about the thing he wanted most.

Within a week of surrendering the final remnants of his supply, a spot became available at Royal Pines, almost four weeks ahead of schedule.

“I wanted change so bad I was willing to do whatever it took,” he said. “Chris drove me and on the way gave me some advice. He said, ‘find the guys who have been there the longest and spend your time with them. You’re going to see the heart. There are people who have to be there and people who want to be there. Spend your time with the people who want to be there.’ So, that’s what I did. I wouldn’t even hang out with anyone who hadn’t been there at least eight weeks.”

Mark thrived in the structured environment, took notes, studied the material, and read his Bible for hours on end. He looked for every opportunity to grow personally and spiritually but became frustrated that he wasn’t having the “God moments” so many of the other clients were experiencing.

“It wasn’t fair,” he said. “I was doing everything I was supposed to and it wasn’t happening to me. Then, one day it did. A guy there had left on pass and when he came back he had Methadone with him. I was in my room reading my Bible and I got wind that this guy had my drug of choice. I was leaving my room and knew I had two choices. I could go left into his room and get the drug, or, go right and go outside and have a heart-to-heart with God. I turned right.

“I was real and honest with Him. I told God I couldn’t do it myself. I didn’t want to make an empty promise. I had done that before and I lied. So I told God that if He’d deliver me from drugs that I would stay at Royal Pines for as long as he wanted me to. When I said that, I meant it. At that moment I felt free and at peace. The cravings for [Methadone] left.”

Mark was a man of his word. Despite deaths in his family and multiple job offers, he stayed at Royal Pines, where he continued to grow and be transformed and eventually graduated all phases and even became a staff member. He sold his trailer, paid off his fines and gave his clothes to the clients. For three years Royal Pines was home. The client who returned with the drugs was caught and dismissed.

Mark later married a woman who caught his eye in the Celebrate Recovery program years before. Despite being turned down for a date at their first meeting, they hit it off over a year later when she “saw that he was a completely different person inside and out.” Mark and his wife now have three children and serve as senior pastors at The Well Church in Gadsden.

He has forged a relationship with his father, a man who was absent from his life for 27 years, and has worked with two different Royal Pines graduates in various industries since leaving the facility. Mark is now the produce manager for a grocery store in Oxford, Alabama.

“It’s funny,” he said after reflecting on his story. “I never thought [the Gadsden area] would be a place the Lord would want me to come back to. This was my old stomping ground, where I got into trouble. Over the last eight years He’s blessed me with a home, an amazing wife, a family. God’s done a lot of things in my life, but the biggest miracle is the one He’s done inside of me.”

Chris passed away just a few weeks prior to this writing. Mark had the opportunity to speak at the funeral of the man who helped him find lasting help. Mark wants to thank Trey Faulkner, who was a friend who saved his life at least three times by providing companionship and shelter when he needed it most. And “Aunt” Debbie, who has also been a tremendous part of his life and recovery.